0
Dating for me was always on to the next one. If it didn’t work with one I wouldn’t allow myself to feel feelings of being hurt. I bottled them in and just moved on. With everyone I dated it was a case by case basis of becoming everything you say you like in those, “What do you like most about your women?” moments. I would absorb that and become she, and they loved that shit soaked it right up. Now it wasn’t a game that I was playing. I guess more of a habit you would say that I was developing. Picturing all the potential of this person in the fantasy worlds I made up in my head, when in reality I didn’t know them, and they didn’t really know me. They didn’t know me for two reasons. One I barely knew who I was, myself.

Two I was giving them an image on a canvas that they painted, and maybe spurts of pieces that were me. The situation always ended up in one or two ways: I would be really interested and have them fall in love with me, but slowly fade once they started showing me things I didn’t necessarily sign up for. Or they would be just as much of a fuck boy as I was that we would bump heads with our scheming ways…and play games until the other got tired.  I’ve honestly only had my heartbroken twice, both were to people I actually tried to wholeheartedly love, be faithful to, and they both broke ya girls heart. Looking back today the only reason I was on them so hard was because they were a challenge, and didn’t fall so easily for my bullshit. My performance to them was just as bad as Beyoncé’s in Carmen…not cutting it.

I have had three “adult” relationships; two were with women, and one with a man that I don’t like to count. But I guess since it did exist it happened, but no I wasn’t faithful to him either. I tried to be in the beginning because he was nice, older, and something way out of my comfort zone. I donI’m shallow. He was far from what I was use too, but he was safe. Safe wasn’t logical though, and I somehow found my way drifting to other things that interested me. Yet I still unfortunately did not walk away like the grown woman I claimed to be. Anywho, that didn’t end well between him and I. I’m pretty sure he’s apart of the “she” hating man club with a picture of me and a bulls eye going through my forehead.

I couldn’t commit because the thought of forever scared the living hell out of me. I had some abandonment issues I had yet to work through. So temporary was normal for me. Forever sounded nice, but in my reality I didn’t know what that looked like.

So I ran away from anyone that tried to stick around any longer than 6 months.

No one taught me how to love. I didn’t have great examples of fostering relationships, nurturing connections, being present and showing up romantically, or platonically for that matter. And for a long time, I didn’t love anyone, not because I didn’t want to, but because I didn’t know how.

I’ve done the whole plan our whole lives together thing enough times to know that I have never been in love with anyone I’ve dated, and eight times out of ten it really was, “It’s not you it’s me.” I was too selfish to compromise, to naive to know what real love was, what it meant to actually be with someone, and the amount of work it actually took to be in a relationship. In the grand scheme of things I found out that I was afraid to be alone because I was afraid to deal with my own demons. The unconditional love I was seeking in others I had to find in God and myself. Often times when there is work to be done within ourselves, we’re in denial and we run. I had to get tired of running, tired of the same old outcomes, and tired of not changing to realize that hurt people hurt people. Now I know you guys are like well damn, are you ever going to commit? Did you get it together? Well, yes, in my next relationship I plan to commit, show up, and honestly give the best version of myself.

I plan to love selflessly, wholeheartedly, and fully. As far as me getting it together, I work on myself everyday. Some days I like the woman I am becoming and some days I’m disappointed in myself, but with all of that I still push forward. It’s a one day at a time process, and a constant reminder to be gentle with myself along this journey. I plan on spending time with myself, nurturing my growth, and becoming the woman that I want to be. So whenever God deems it time for me to be in beautiful love I’ll be ready. No rush though, take your time Lord. 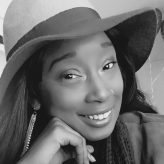 Chyna Johnson-Owens is a recent graduate from Norfolk State University graduating with her Masters in Community Counseling, and now working as a Crisis Counselor. Her passion is writing poetry, motivational speaking, and singing. She strives to one day release her poems to the public through a book format, open a non profit organization for young girls who have been abused and dealt with parent incarceration. Her ultimate goal is to continue to chase her dream in music, and open a community center in inner cities and offer counseling services. @queenshec