We’ve all been guilty probably of surfing the internet, or scrolling through Instagram and seeing a couple who is seemingly doing well in life – a beautiful picture of the couple all smiles, with a sentimental caption that has made us go: OMG #RELATIONSHIPGOALS! I am not 100% sure who started this whole #GOALS trend but to be honest, I am ready for it to go away. While there is nothing wrong with seeing something or someone and being motivated by it, this whole #RelationshipGoals trend is based on a false reality! I just want to shed some light on somethings that have to take place behind the scenes if you want to be -as the eloquent writer Jay Z put it –

Everyone loves to say my husband & I are #RelationshipGoals & while it’s cute, sometimes I cringe because I’m always thinking “you have no idea!!” People see the external success of a Doctor & Lawyer- to be- duo & they are mesmerized with the titles having no clue what it takes to make this unit function. So here is some advice.

There is a lot of behind the scenes that comes along with the title of “Doctors Wife.”  A bunch of people assume because your husbands a “Doctor” everything is perfect, you’re rich, & you have no problems in the world- & if you do -money can fix it! Ummmm All of those things are FALSE. Don’t get me wrong, I love our life and I am not complaining at all, but it is not liken to the image people have made up in their minds for it to be!

I’ve gotten comments before like “You’re lucky your husbands a Dr. y’all are going to be rich” or my favorite “Why are you even in Law School? You can just be a stay at home wife who shops all day”. LOL I can’t laugh at these misconceptions hard enough. Breaking News: Being a “Doctor’s Wife” is not that glamorous.

Granted there are a ton of Doctors in certain specialties that are what the world would consider rich because of the money they make, but that is not the case for most Physicians. It is true however that we personally are rich, but it is only because we have things money cannot buy- each other 🙂

A lot of people want the “perks” without putting in the work.

I am here to tell you, being a Doctor’s Wife usually means at times you come second. Ok, first after God but seriously, your husband’s patients come first! So why yes I’m lucky I get to live a totally unpredictable life most of the time. It makes for some excitement occasionally but it can also be a total buzz kill. 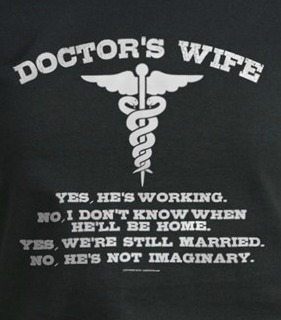 That date you planned & got all dressed up for can easily be put on hold when he’s on call. Those typical holidays or times that are spent “with family” can sometimes be spent ALONE, yup that includes your birthday, your kids “important” events & even anniversaries. Set your expectations low- actually you might be better off having none. lol

I joke all the time about being a “single wife.” I learned the game quickly and how to master getting things done without my husband being present. Now I will say we get a lot of family time compared to some, but that was because of his sacrifice: he intentionally chose a specialty that would allow him to have a balanced family life- which means more than the monetary gain of other high-income specialties.

Also, being married to a law student is rough. Most of their days and nights are spent studying.  ALL. THE. TIME! If you can’t sacrifice your needs for the betterment of your partners academic obligations, sorry, but It isn’t for you.

I was sooooooo fortunate that Noah had gone through 2 years of medical school before I decided to go to law school. He understood my life and struggles in a way a normal Spouse or just people in general might wrestle to comprehend.

Them: What are you doing?

It got to the point that they didn’t even ask when they called because they always knew the response but it was 100% accurate. Whenever I was not in class, I was usually studying. I did give myself one day a week (typically Sunday) to do nothing related to law school, but aside from that even on my longgggg commute or in the gym I listened to my outlines that were pre-recorded on my phone. I was constantly learning.

The times where I was not studying were few and far between. It takes true sacrifice to know that there isn’t much “free time” to spend with your partner- so just sitting in the same room with them while reading or making up raps to help prepare for final exams, can sometimes  be “date night.” {This is a picture of Noah acting as though he was in a section popping bottles, while we rapped rule statements for me to remember for an exam 1L year}

While I enjoyed those moments and wouldn’t trade them for anything, if you’re not willing to understand that you can’t do/date/be on the scene like everyone else (the training years are straight up Grind Time) you’ll have a hard time making it work with any person in a high demanding career.

Oh & speaking of misconceptions & sacrifice, most physician spouses who are SAHMoms/Wives that you think are with their husband for his money and stay home because they got it like that! (where?) lol  – are usually well educated women who had to put their lives on hold for their spouse.